Soft, homemade cinnamon rolls filled with a sweet, cinnamon mixture and topped with a creamy frosting.  A delicious way to start the day. 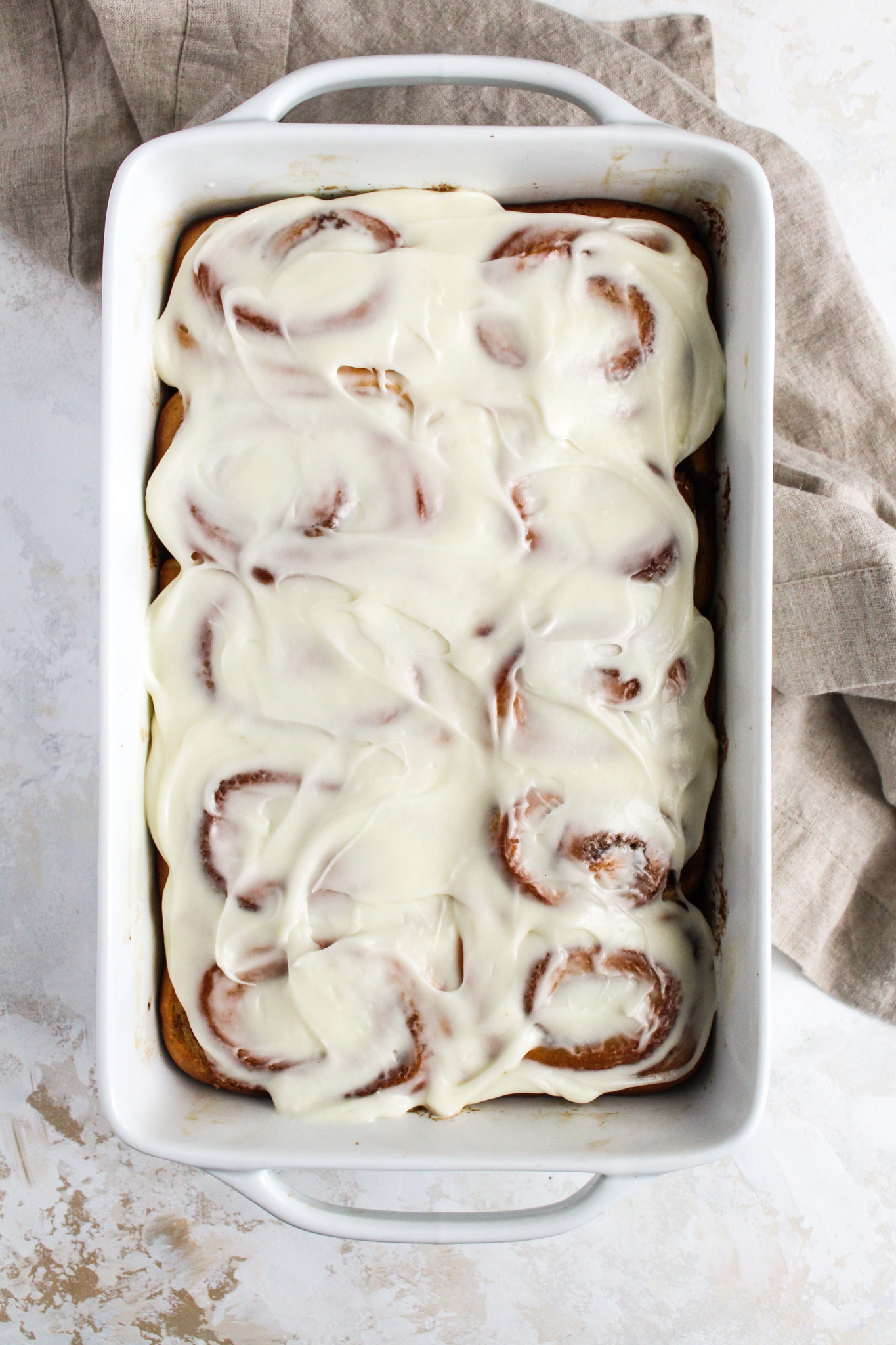 Homemade cinnamon rolls are my favorite breakfast indulgence.  I love the smell of sweet, cinnamon sugar as it permeates the kitchen while cinnamon rolls bake.  It's such a warm and cozy scent.  And what's not to love about biting into a warm roll out of the oven, as the frosting slowly drips down the side.  YUM!  Let's be honest, the best part of any cinnamon roll is the center.  It's the softest part and full of the cinnamon mixture.

Taking the time to make homemade cinnamon rolls beats any store-bought kind.  It's absolutely worth the time and effort. When I was pregnant with our son, I woke up one morning craving a cinnamon roll, and of course it had to be homemade.  I called all the breakfast spots near us until I found a place that made them from scratch.  And boy was it delicious!!  Pregnancy craving satisfied.

There are no crazy ingredients that go into creating delicious homemade cinnamon rolls.  Just simple pantry staples.  The key is to ensure the dough is mixed just enough without being over mixed, having ingredients at the proper temperature, and proofing your dough in a warm place. 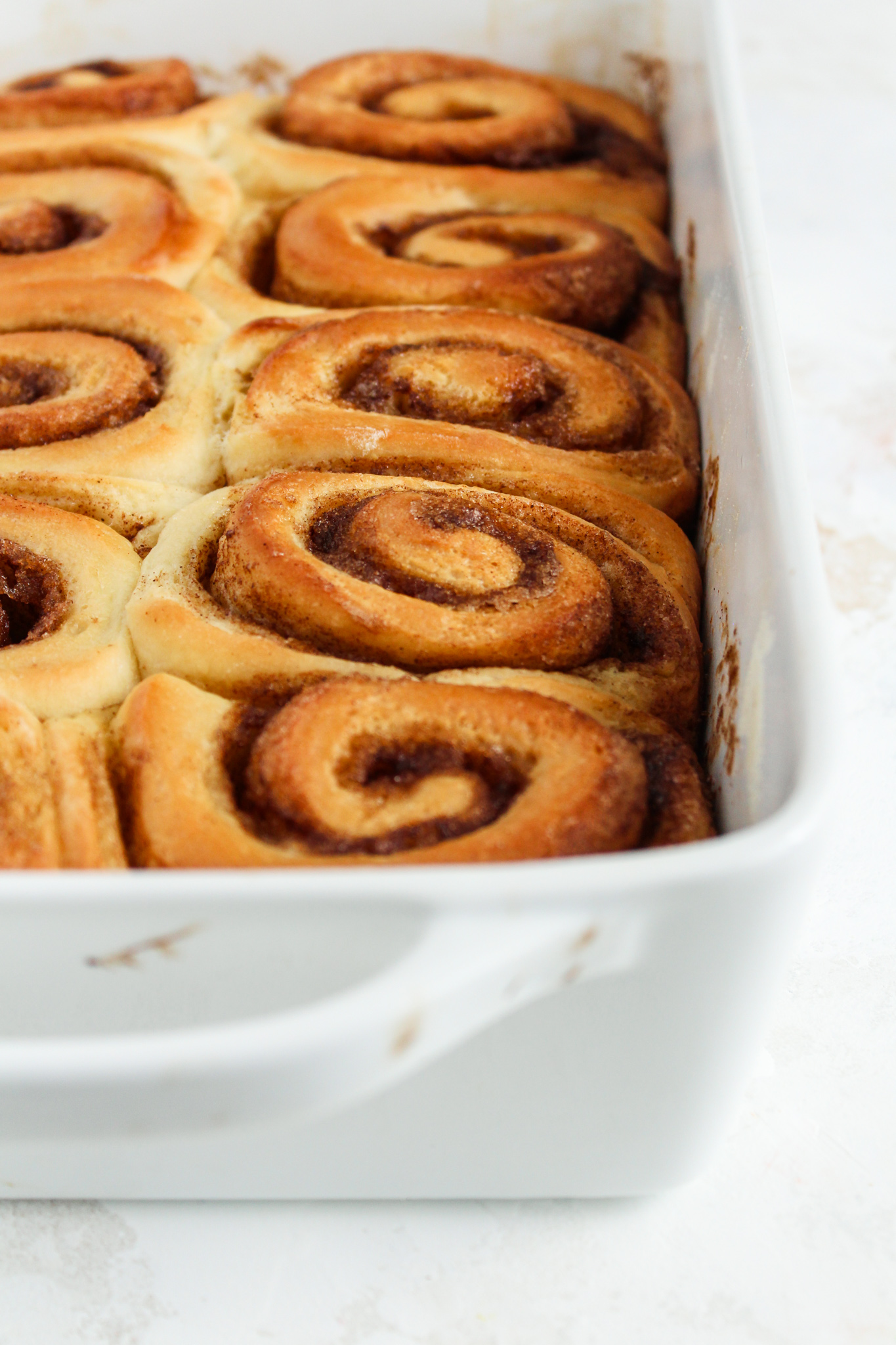 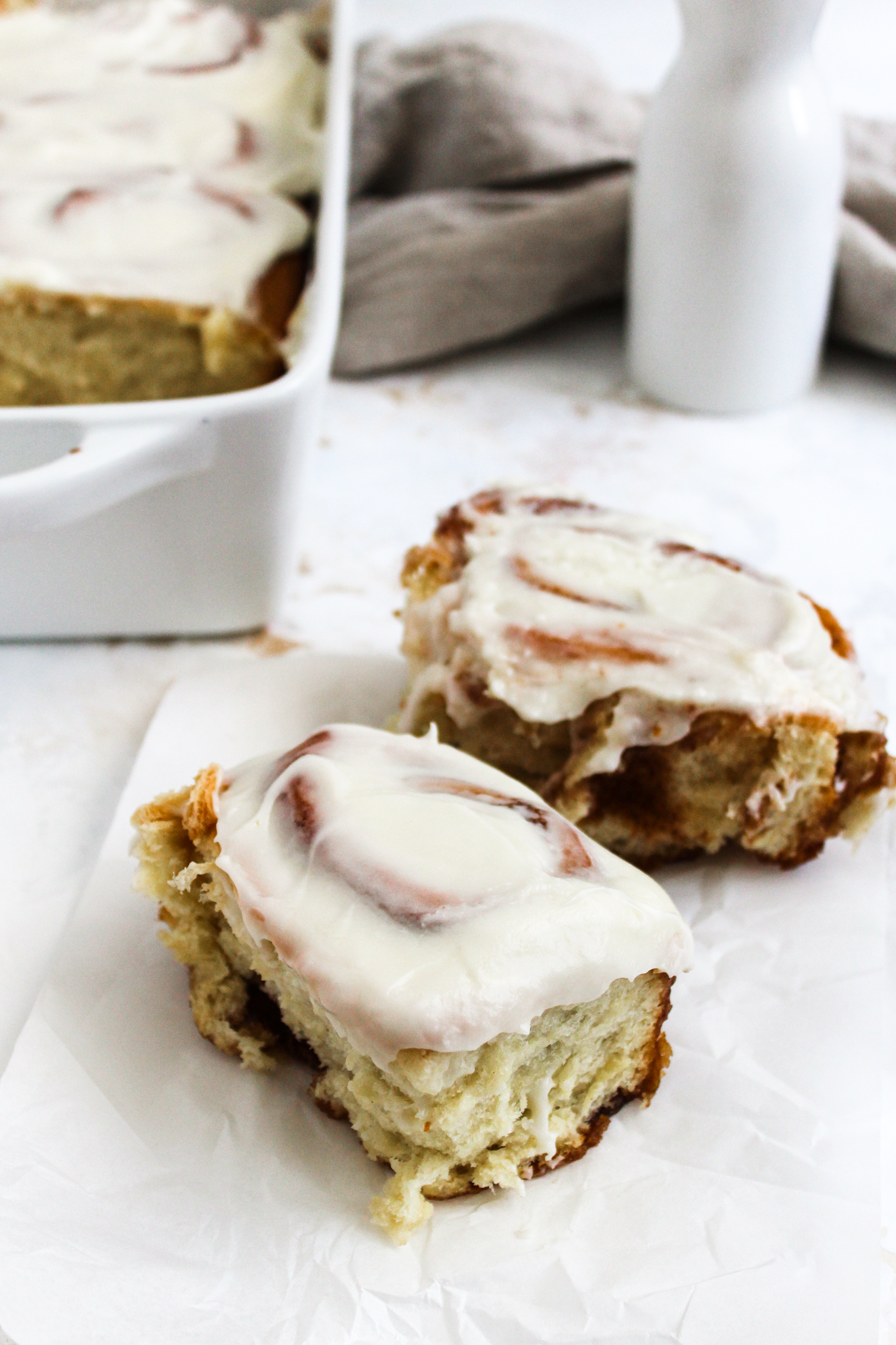 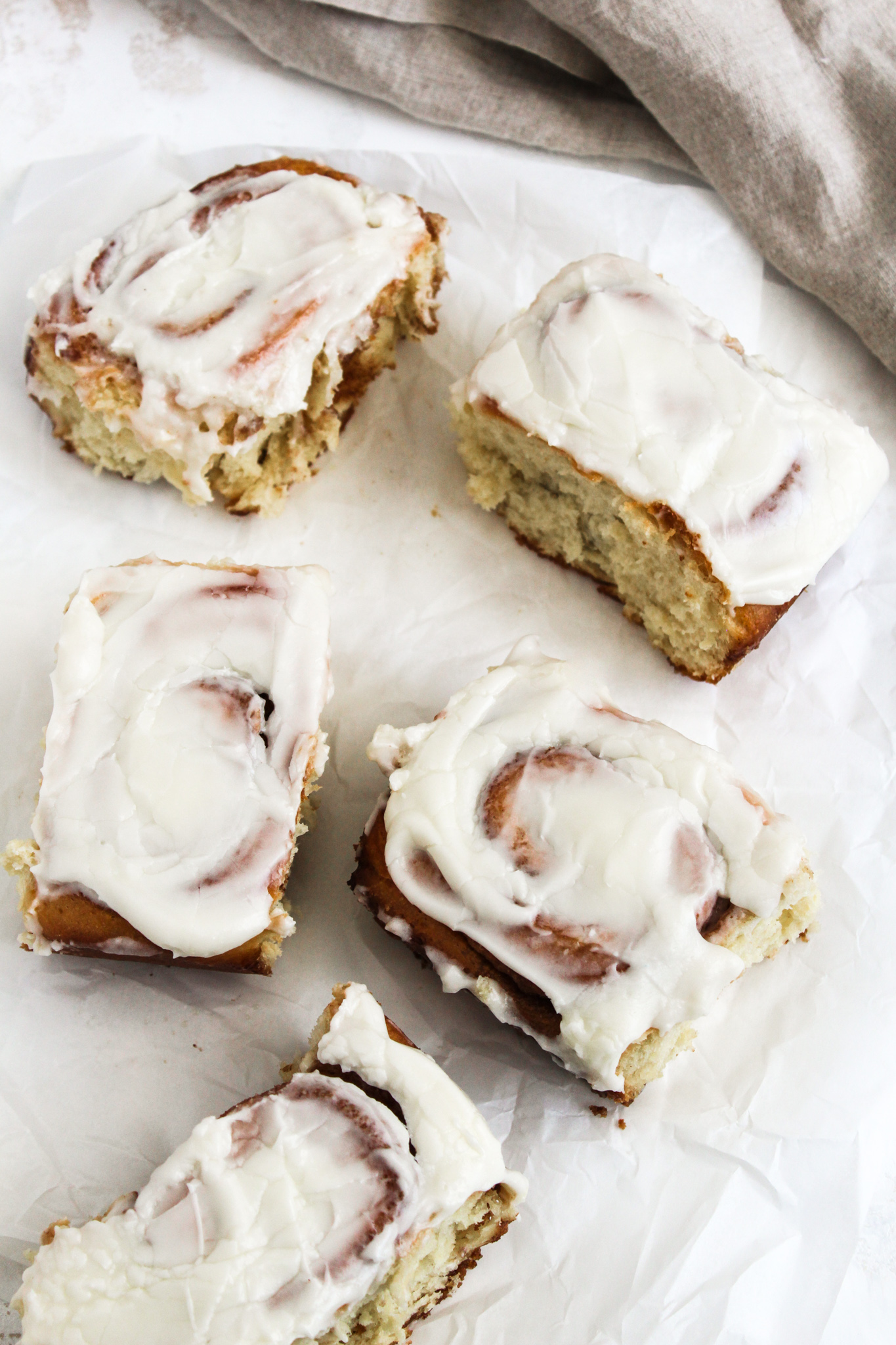 You can't have a homemade cinnamon roll without a delicious frosting.  My go-to frosting is cream cheese based!  It's creamy and rich, leaving you wanting more!  Begin by beating cream cheese and butter on medium speed until completely smooth and creamy.  Add the powdered sugar and beat until fluffy.  Finally, add the heavy cream to thin out slightly.  Frost the cinnamon rolls while they are slightly warm so that the frosting easily spreads.

Enjoy making these homemade cinnamon rolls.  They are delicious for breakfast with a fresh cup of coffee and equally delicious as an afternoon treat with a cold glass of milk.   Happy Baking!

Soft, homemade cinnamon rolls filled with a sweet, cinnamon mixture and topped with a creamy frosting.  A delicious way to start the day.

Pin it for later: 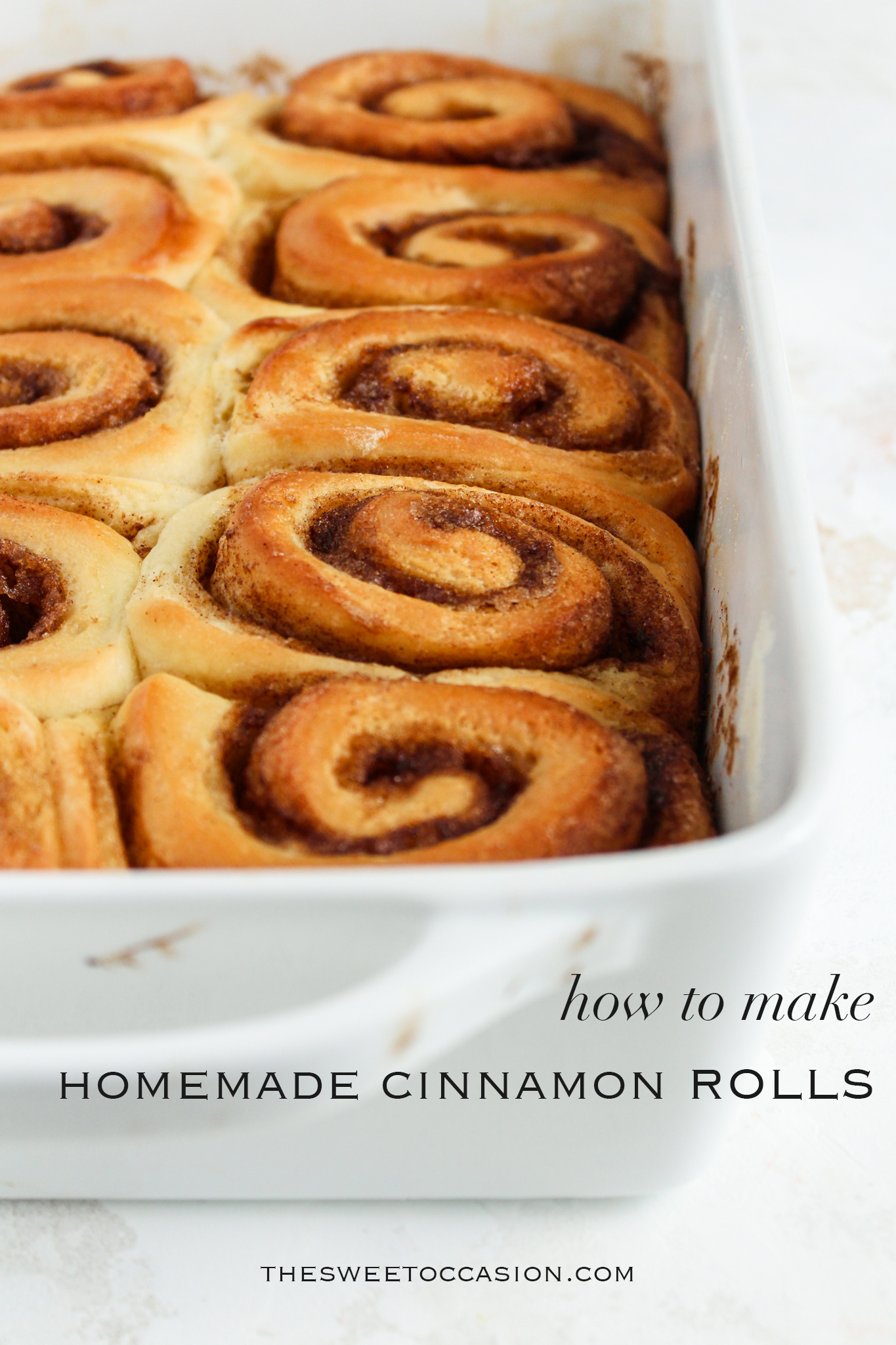 This site uses Akismet to reduce spam. Learn how your comment data is processed.

Professionally trained pastry chef at your fingertips. I provide the baking knowledge and tools for bakers like you to successfully create in your kitchen.


Hi friends!! It's been quite a while (adding a thi

New Peppermint Cake up on the blog! This three-la

Coffee Cupcakes are definitely for the coffee love

Almond cream is such a versatile recipe that's per

⁠Looking for an easy recipe this holiday season?

The holidays are a time for lots of baking. Add c

Holiday baking can get overwhelming. To help ⁠e